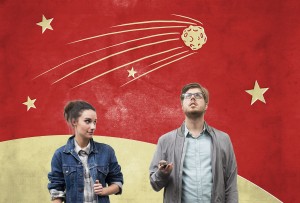 The Melbourne International Film Festival (MIFF) is the third Australian Festival to screen comedy short film My Best Friend Is Stuck on the Ceiling, starring Erin James and Tom Ward.

The film will be shown as part of the Australian Shorts program at the festival, which runs from 28 July – 14 August, 2016.

Produced by Sophie Hyde and Christine Williams for Closer Productions and written and directed by Matt Vesely, ‘Ceiling‘ is a romantic comedy with a bit of sumthin-sumthin added in for good measure. The short follows Connor (Ward) who secretly in love with his best friend Rach (James).